Provocation depends upon the mental attitude of the people : Delhi High Court 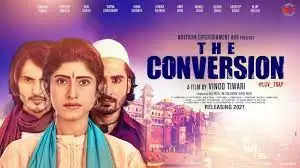 The Delhi High Court Friday refused to entertain a public interest litigation (PIL) against the release of a movie, ‘The Conversion’, saying “provocation depends upon the mental attitude of the people”. However, the court asked the Ministry of Information and Broadcasting to take a decision on the representation made by the petitioner against the movie.

All India Lawyers Council prayed for withholding the release of the movie and also sought a direct deletion of its trailer from YouTube.