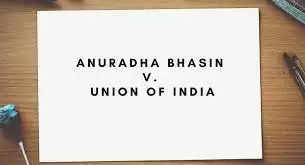 Summary  -  The case concerned the internet and movement restrictions imposed in the Jammu and Kashmir region in India on August 4, 2019, in the name of protecting public order. In the end, however, the Court did not lift the internet restrictions and instead, directed the government to review the shutdown orders against the tests outlined in its judgment and lift those that were not necessary or did not have a temporal limit. The Court reiterated that freedom of expression online enjoyed Constitutional protection, but could be restricted in the name of national security. The Court held that though the Government was empowered to impose a complete internet shutdown, any order(s) imposing such restrictions had to be made public and was subject to judicial review.

Subsequently, the trip of the outsiders was cut short and arrangements were made for them to go back, educational institutions and offices were also shut down until further orders. District Magistrates, comprehends breach of peace and tranquillity, and hereafter imposed restrictions on movement and public gatherings by applying Section 144 of Cr.P.C. On 04.08.2019, internet services, mobile connectivity, and landline were shut down until further orders.

The petition W.P. (C) No. 1031 of 2019, was filed by Ms. Anuradha Bhasin. She was the executive editor of the Kashmir Times Srinagar Edition who argued the internet to be essential for the modern press. The petitioner pointed out that print media could come to an end without the internet since the newspaper had not been published from 06.08.2019.

The petitioner's argument was about the failure of the government to give a valid reason for passing such order as required in Suspension rules. She additionally pointed out the reason for such orders to be passed was wholly based on mere apprehension of risk interns of law and order which was not the case. The contention of the petitioner was to point that the government needs to find a way to balance the measures necessary to maintain national security on one hand and the rights of the citizens. However, the state is establishing it as the ground for passing the order to restrict the rights of the citizens. He claimed that restrictions were to be imposed temporarily, however, are imposed for more than a hundred days.

It is necessary to publish order is a component of natural justice and it even is made accessible to the general public. The state cannot claim any kind of privilege before the court for not producing such judgments. Furthermore, the proportionality test was upheld by the court and must be seen that restrictions imposed on the fundamental rights of citizens are reasonable or not.

The subsequent petition W.P. (C) No. 1164 of 2019 was filed by Member of Parliament, Mr. Ghulam Nabi Azad, whose argument was that the state cannot claim any kind of privilege before the court for not producing such orders. Additionally, he stated that the national emergency can only be declared in a handful of cases, whereas in this case, neither internal nor external disruption exists. There was no apprehension in the law and order of the state and hence no need of passing Section 144 of CrPC. His contention was not to restrict everybody however to impose specifically against the people of a certain category who neglect the peace

The state should impose the least restrictive measures and must balance the fundamental rights of citizens with the safety of people. And imposing restrictions on the internet, impacts not only freedom of speech and expression but also the freedom to carry any trade, profession, or occupation. However this petition was withdrawn during arguments, the petitioner suggested that the restrictions imposed injure the rights of the law-abiding citizens.

On the other hand, the respondent side Mr. K.K. Venugopal the Attorney General submitted that the condition of Jammu and Kashmir having militancy has to be taken into account. He produced the in the court the contention for passing such order was after taking cognizance of the circumstance in the state. The mere reason was to take preventive measures knowing about the history of internal and external militancy, otherwise, it could lead to huge barbarity. He compared the circumstances to that of 2016 when a terrorist was killed and similar actions were taken by the officials.

Mr. Tushar Mehta, the Solicitor General expressed that the intention was to protect the citizens which is the first and foremost duty of the state. He considered such orders to be necessary to have peace in the state. He claimed that such orders are systematically being relaxed depending upon the present circumstances of the region.

The Magistrates contended that there is almost full relaxation which was earlier imposed based on threat perception. All televisions, radio channels, and newspapers are functioning including the one where the petitioner is working. The orders passed under Section 144 of CrPC can be preventive for the safety of the citizens. He justified that it is impractical to segregate the ones who are agitators from the peacemakers. He argued that the internet was never restricted in Jammu and Ladakh. Even though, through social media messages can be sent and received to people to incite ruckus.

The intention of restricting the internet in some regions was not only social media but also the dark web, which allows the sale and purchase of illegal weapons. He concluded that all the orders passed have followed the procedure in Suspension Rules and are being reviewed strictly.

The court held that the government cannot contend any exception for providing any order before the court which is passed under Section 144 of the CrPC. The court declared the internet to be essential in today's life and thereby freedom of speech and expression and freedom to practice any profession, occupation, or trade on the internet is a part of fundamental right under Part III of the Constitution.

Furthermore, the court held that the prohibition for access to the internet will only be valid in certain circumstances only otherwise it'll cease to exist. Such impositions affect the Fundamental Rights of the people, therefore the court ordered to follow the test of Proportionality to satisfy that no kind of violation of natural justice exists.

The court did not remove the restrictions on the internet and movement of the citizens, however, the judgment deliver widened the interpretation of freedom of speech and expression by including the right to access the internet which was an essential part of the Article which could only be restricted in the situation of national security.

The judgement did not provide immediate relief to the citizens affected due to these orders but laid down principles for future suspension orders and their procedure to prevent the state for abuse power. This is a solution for further issues.

The Internet has become a tool for spreading a piece of important news or is necessary for a two-way conversation. It has become an integral part of the life of people. In a situation such as today's, the circumstances of coronavirus lockdown, wherein because of internet connection students all over the world can have access to education even after staying at home, people around the world can work and make money for their living.

In a situation such as this internet plays a crucial role, which now has become a right in the interpretation of the Right of Freedom and expression under Part III of the Indian Constitution.